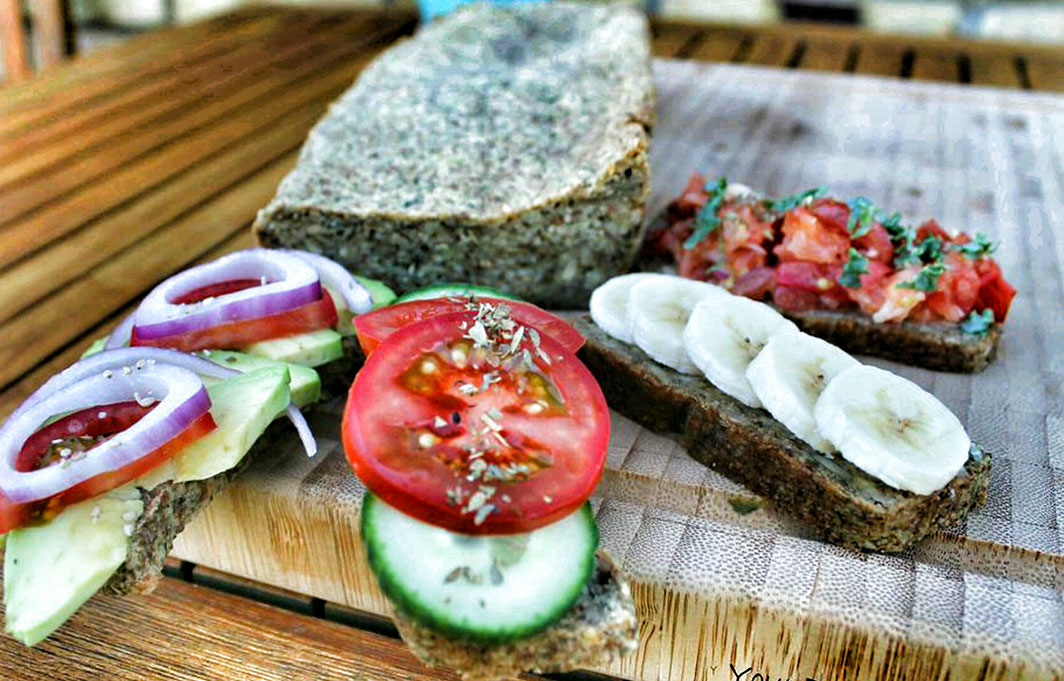 It is unbelievable how sacred some foods are to people. I have been working as a nutritional therapist for few years and almost every time when I suggest to people to leave bread and products containing gluten alone for some time, it is like I am asking them to rip their hearts out. That is how deep it affects them. But almost every time a person tries for few weeks or even days, they feel such a big difference. Many of my clients have even decided to stop eating those product all together after their experience. But many of them struggle with what to eat instead. There are so many things that can be an alternative to bread, just use your imagination. Fill a bell pepper, a cucumber or a portobello mushroom with a good pate, hummus, salsa or pesto, topped with tomato, red onion, avocado or other things you like and eat it like bread is one idea, sliced apples with peanut butter on top is another.

But, if you can´t leave bread alone, here is a great recipe of bread that does not contain gluten. I have tried many times to make a good gluten free bread recipe, but have not always been successful. But this one I like, it´s not a fluffy bread, but more like a light rye bread. I use psyllium husk powder and chia seeds to keep the bread sticking together, so if you don´t have those ingredients, don´t try making the bread. It is also from these two ingredients you get your fiber from.

Place the almond and a cup of pumpkin seeds in a food processor and blend it until it looks almost like flour. Put it in a bowl and stir in the remaining dry ingredients (don‘t forget the rest of the pumpkin seeds). After stirring the ingredients together, pour the water in and blend well together.

Let the mixture sit for an hour or until the water is absorbed completely and the dough is really firm. If it is still a bit wet, stir in an extra spoon of psyllium husk powder.

Press the mixture well into a greased form and bake for appr. 1 hour in 180°C warm oven or until golden brown.

I like rosemary taste, but my kids are more for oregano (pizza like) taste. You can mix garlic, few raisins, olives or other things you like in your bread mixture for different taste and more variety and be creative in your choice of toppings.